The Power of the Free Will 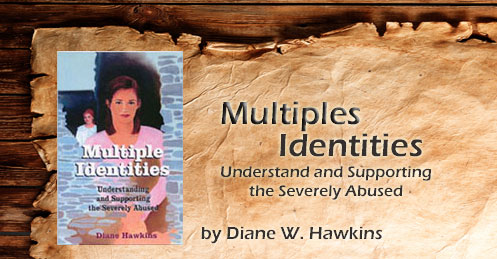 A Guide to understanding and supporting survivors of severe abuse.

Diane Hawkins' book, previously published as Supporting Ritual Abuse Survivors, has been updated and expanded to 232 pages. It is designed to bring understanding and support to survivors of severe childhood abuse, especially those who suffer from Dissociative Identity Disorder (DID) as a result of sexual or ritual abuse.

Covering a wide range of topics, including trust, dissociation, memory, conflict, emotions, self-harm, and spiritual warfare, the book concludes with three appendices providing a glossary of terms, a list of types of alter-identities, and a Satanic calendar.


From the back cover

"The last two decades have seen increasing numbers of ritual abuse survivors seeking help. They join the ranks of other victims of severe childhood abuse who could only cope with these horrific realities by splitting themselves into multiple identities.

"Bearing the diagnosis of Dissociative Identity Disorder (DID) too often leaves them feeling isolated in a world that has no "box" in which to fit them. Acceptance usually requires that they hide behind an artificial mask, trying their best to conceal the dynamics of who they really are and the struggles so prevalent in their lives.

"This book is an effort on my part to help bridge this information gap, building understanding that will hopefully result in greater support for those who are courageously fighting to reclaim lives shattered by unspeakable evil."

Diane W. Hawkins, M.A., is a graduate of Taylor University (B.A. 1969) and Wheaton Graduate School of Theology (M.A. 1973). Diane served as a missionary with The Evangelical Alliance Mission (TEAM) from 1971-1976 in Zimbabwe (then called Rhodesia). After marrying Tom in 1977, she served as a pastor's wife and ladies' Bible teacher. She also accompanied Tom in presenting seminars on DID and RA across the continent. She courageously approaches this subject from the perspective of personal experience.