Traditional psychotherapy or counseling will not be sufficient in itself to bring complete healing and spiritual freedom to these individuals.

A typical "deliverance" approach may actually feel like a form of religious abuse causing great harm to parts of the person. 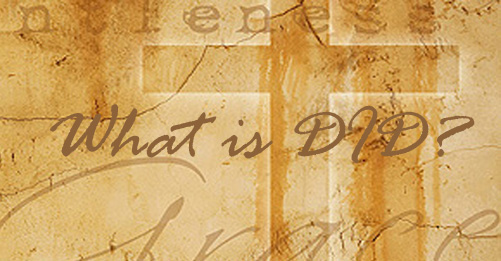 What is Dissociative Identity Disorder (DID)?

(Definitions, Frequency, and Cause of DID)

Excerpts (some paraphrased) are from:

DEFINITION OF DISSOCIATION
Dissociation is generally considered to be a disturbance or alteration in consciousness, memory, identity or perception of the environment. Normally, a person integrates these various functions, whereas dissociation is a compartmentalization of these functions. Dissociation is a process whereby the mind separates one or more aspects of its function (knowing, feeling, tasting, hearing, seeing, etc.) away from the normal stream of consciousness.

Dissociation lies on a continuum ranging from the normal phenomena of day dreaming, fantasy, and “highway hypnosis” on the one end to the polyfragmented (highly complex) multiple whose mind is split into hundreds (or thousands) of separate identities on the other end. This condition was formerly known as Multiple Personality Disorder (MPD), but was changed to Dissociative Identity Disorder (DID) in 1994 by the American Psychiatric Association with its publication of DSM-IV, in order to more accurately describe the disorder.

In the case of dissociation outside the bounds of "normal" dissociation (i.e. highway hypnosis), the mental separation involves the building of a more or less permanent and impermeable wall between the separated components so that part of the person can be unaffected by a given experience. We believe that such a defense is a temporary God-given capacity that enables a child to survive overwhelming trauma, though later in life this compartmentalization usually leads to dysfunction. Once a child successfully employs the dissociative defense, dissociation usually becomes the preferred defensive mechanism and often will be used subsequently even when less extreme defense processes might suffice in threat containment.1

Dissociative Identity Disorder(DID) is not to be confused with demonization or schizophrenia. The disorder is characterized by the following:
--Two or more personality states or distinct identities who think, feel, and choose from a different world view. As a result, each identity perceives God, themselves, other persons and their environment differently.
--Two or more distinct identities must (at different times) take control of a person’s behavior.
--Though normal memory is hard to define, there is general agreement in the mental health field that persons exhibiting DID have more memory loss than a non-dissociated person.
--The resulting disturbances in the functions of the mind are not due to a medical condition or the effects of drugs or alcohol.
--These extreme Dissociative experiences are not due to psychosis (being out of touch with reality).

It is also common to have personality fragments, which are defined as a part of the person with a persistent and separate sense of identity but a limited (compared to a personality) range of function, emotion, or history.2

DID can present itself in a variety of subtle ways (explained in detail in Dissociative Identity Disorder). Few cases will be as obvious as the stereotypical Sybil with dramatic, abrupt switching from one personality state to another. Most multiples will initially be unaware of such switches and will attribute changes in the way they perceive God, themselves, others and their environment as just mood swings. Total amnesia among the presenting identities is no longer viewed as part of the diagnostic criteria.

This condition is defined fully in Tom's book, Dissociative Identity Disorder: Recognizing and Restoring the Severely Abused (Volume One).

FREQUENCY OF DID
According to the psychiatrist, Dr. Colin Ross, some form of pathological dissociation may affect as much as ten percent of the population.3 DID itself, according to his data may affect at least one percent of the general population.4 Other researchers have reported that as much as 20 to 50% of psychiatric hospital inpatients suffer from dissociative disorders.5 Many working in the field will not be surprised if further studies demonstrate that as much as five percent or more of the population has DID. Many of these are people who, in the past, were misdiagnosed by the medical and mental health community. Previously the disorder was so narrowly defined and considered such a rarity that it was little studied or understood. Fortunately, that lack is now being corrected, though the societal “need” for denial has not diminished.

Cause of DID
It is generally agreed that in about 97% of the cases where dissociative identity is formed, the victims suffered serious abuse at an early age. Friesen comments,
Most of them have been abused sexually. They needed to use dissociation to cope with the abuse. . . .the life circumstances have been dangerous, and the children continue to suffer abuse over a long period of time. The home is not a safe place, and the child needs to keep on using dissociation to deal with the continuing abuse.6
It is not always true, but too often the home is the source of the abuse.

DID is not caused by a brain or chemical deficiency. In fact, multiples are usually above average in intelligence and creativity. In this sense DID is not a pathological sickness but rather a God-given, temporary coping mechanism for an overwhelmed child whose only options were to dissociate, lose touch with reality (go crazy), or commit suicide. DID is generally considered a "disorder" rather than a mental illness because it is not caused by defective brain chemistry and treatment is usually effective. Someone with DID might be described more accurately as a normal person with a normal brain responding to the abnormal experience of overwhelming trauma.It is helpful to note that the literature in the field reflects an approximate 80% to 90% cure rate for those multiples who stay in therapy.